2 and a half day road trip. Pacific Northwest. Caving through lava tubes, Sledding on a volcano in June. Sound like a good idea… Of course. That’s what we thought too.

The group consisted of my brother Isaac, myself, my friend Tristan, and Graham, a mate from work. The proposed trip was formulated by Tristan, as an adventure to celebrate his 40th birthday. He had purchased the permits a while back and the dates he got was the first weekend of June. We pieced together the trip and trip members in the last few weeks, sorting out background logistics. Etc. All set. Go

Tristan and Graham had to put in a half day at work on the Friday, so we didn’t get out of Vancouver until after 1pm on a Friday afternoon, which meant the border was likely to be a parking lot. Which it was. Ugh. 2+ hours sitting, waiting to go play in Washington State. It was a good opportunity for everyone to get to know each other a little bit better. Recounting past adventures and imagining what the coming days will be.

We finally got past the border and made our way down, down, down through the melee of the greater Seattle area. A long days drive had finally brought us to our exit off the I-5. We were getting a bit punchy and in need of some dinner. The evening had worn on and the battle of Friday Traffic had left us with minimal eating options. We pulled into a gas station to assess. There was a) gas station food. b) “burgerville” just up the street (according to the lady at the gas station. Or c) freeze dried meals at the parking lot of the mountain. As late as it was we elected with burgerville, which we soon discovered after driving off into the darkness of Backcountry roads did not seem to exist, or the directions we less than accurate. We turned back to the gas station to find they were just closing up. We quickly ran in and grabbed what we could for dinner. Sandwich, chocolate bars, whatever. We then proceeded the final push past the town of Cougar to the trailhead and our camp for the night. Tents set up and sub par food inhaled. We called it around midnight. That was long day. We will be getting up in 3.5 hours.

330am. Go time. Sluggishly we emerged from our tents and started getting ready. It was surprisingly warm out. A quick cup of coffee, and a bar. We packed down the tents and made our way to the trailhead to sign in. It was already getting light out.

The trail weaved through some of St Helens ski trails before opening up to the ridgeline. We began to get to see the world around us. The valley below, Mt Hood to the South, and Mt Adams to the East. 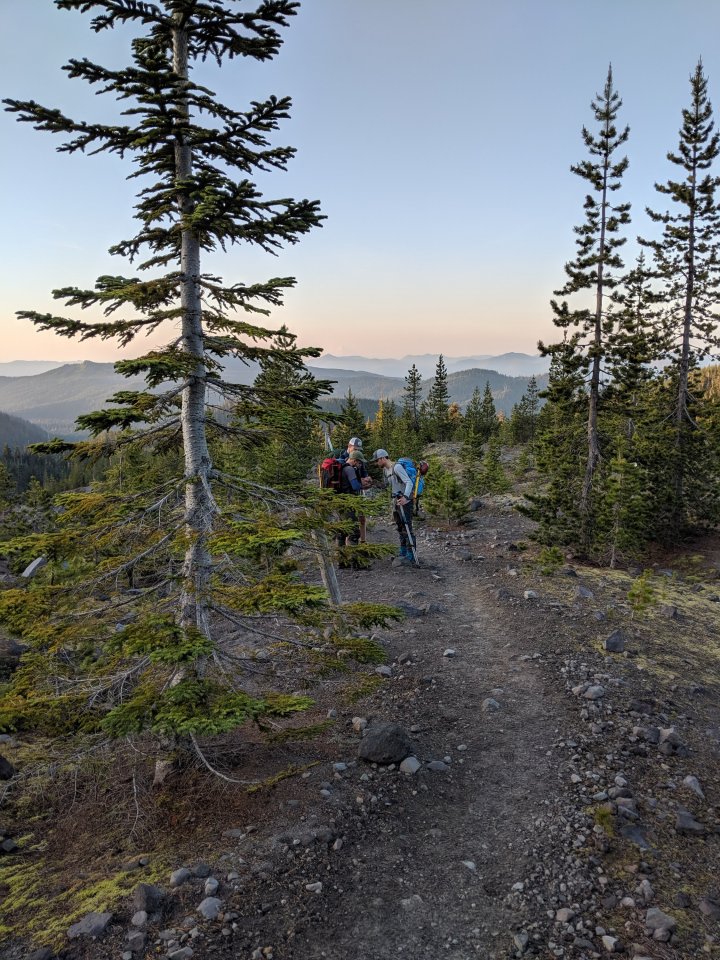 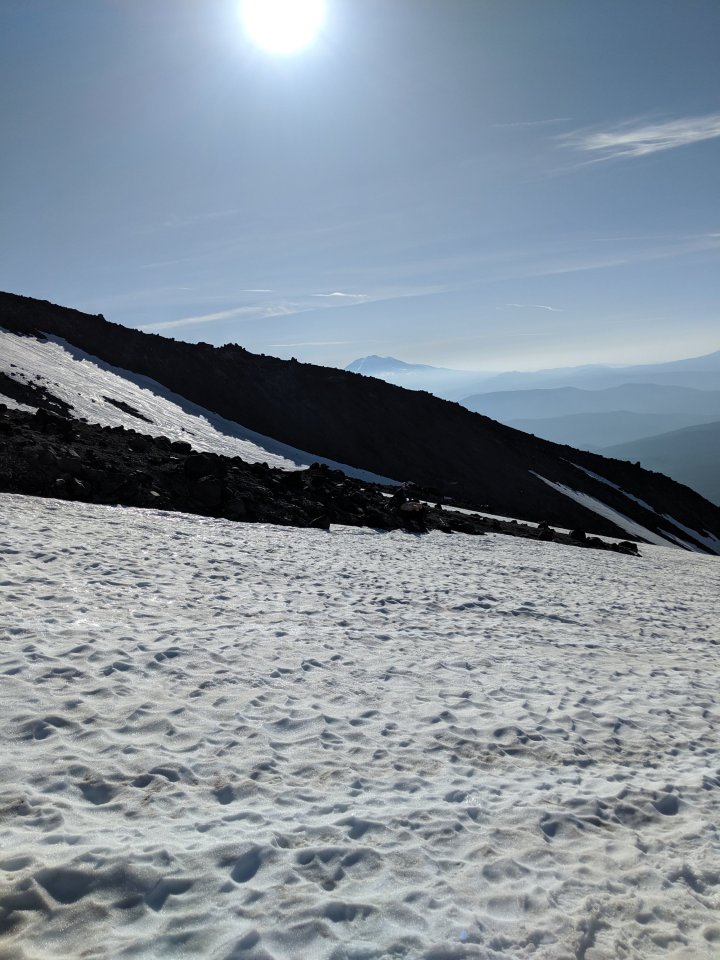 Once we hit the snow line we cramponed up and continued ascending. It was absolutely perfect hiking conditions. Almost bluebird skies. Warm, but with a bit of a breeze. Not too crowded on the mountain, a couple other groups of climbers but otherwise we had the place to ourselves. The snow had melted considerably from a few weeks earlier (according to previous trip report photos) but still had icy patches and we we’re glad to have brought the crampons and axes. Final push up to the crater rim got a bit steep and was slow going. And finally. Summit. Just around 10am. It is quite astonishing to view into the crater and the magnitude of the damage caused by St Helens eruption 40 years ago. The summit had a strange feeling to it. Like standing on a battle field from some great war. Eerie. 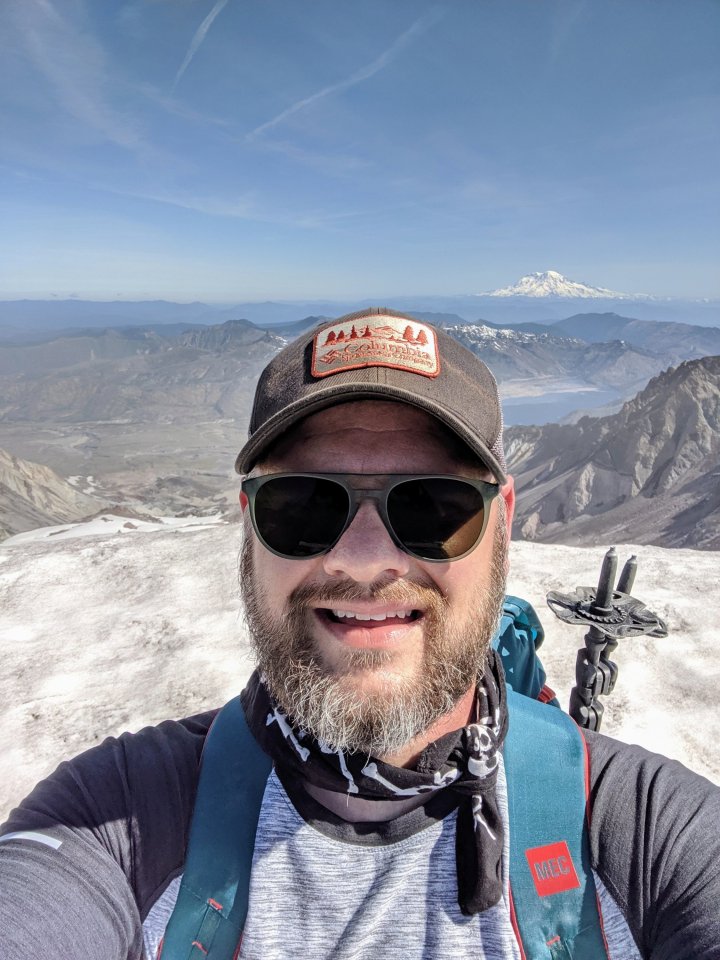 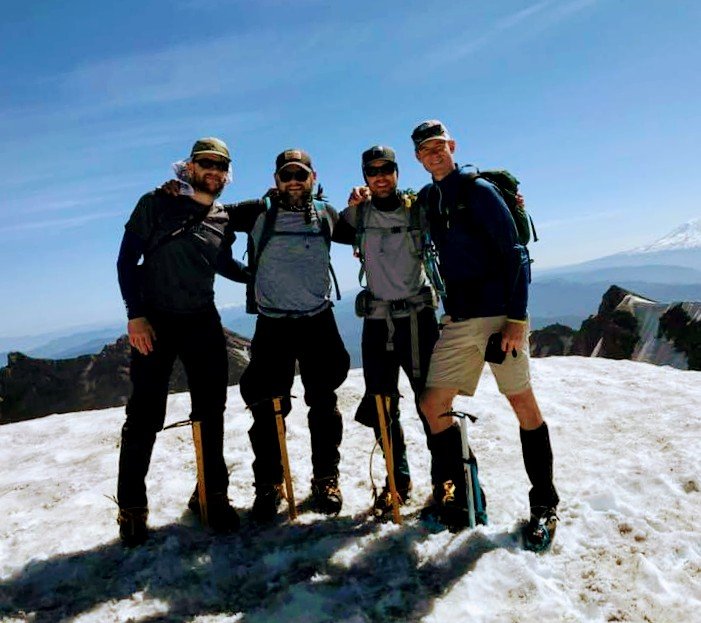 We began our quick descent down the mountain via magic carpets which saved us considerable time. Albiet a little sketchy as we neared the lower sections where there was more rock and mountain than snow. But we made it off the snow unscathed.

From there we blasted back down the trail to the parking lot. We packed the vehicle quickly as this was not the end of our adventure, we still had one more destination for the day. The Ape Caves. Which was only a few miles from us. Perfect. The Ape caves are these long underground hollow lava tubes that flowed out 2000 thousand years ago. They are open to the public and are self guided. We made our way, hiking from the road up to the far end of the tubes and climbed in.

It was cool, and damp, and honestly perfect for us. It allowed our core temp to drop and kept the legs moving for awhile. We crawled and climbed through the caves for about an hour before resurfacing back at the road where we parked. A super cool experience and recommended if you’re ever in the area.

After the caves we drove back into Cougar and checked in at the Cougar RV park. Had a shower and went out in search of beer and food. This part was easy as there was only 2 options. Cougar pub or the cafe. We elected the pub and went in for a well earned couple of pints before heading back to our cabin and sit around the campfire.

A fantastic weekend. Solid effort from the boys. Until the next adventure.

Completed my 2022 running project! Grinded out, Mountain runs, Headlamp Half Marathons, running in -10 C, up to +30 C. If you've been following along the final blog post is live, the link is in my bio. Cheers
Last breaths of the sun.
Typical after school 🎒
Hello Sunshine.
MOMAR time! #momarcumby #momarfamily #adventureracing #kayaking
Fall planting session underway! #garden #gardening #homegarden #moreplantsplease #kidsandnature
Loading Comments...
%d bloggers like this: