So about a month ago and I was scrolling through the likes of Instagram one evening and came across some popular shots of Watersprite Lake BC. A very iconic looking scene. Crystal clear blue water, with a mountainous backdrop of rocky peaks just begging to be climbed. I was drawn in. I assembled a team. My cousin and a mate. A free day coming up, we went to investigate. A brief day trip confirmed that the surrounding peaks, were in fact as advertised. However this was not to be the day. Only a recon mission.

Fast forward to a few days ago. A free day, good weather, and a new position at work to start the next day, I had a good reason to get out of the city and clear my head, even if only for a day.

I picked the peak directly overhanging the lake. So prominent. I dug around on as much beta as I could to see what I would be contending with.

An early enough start, I left home just after 5am. Quick coffee on the way out the door. As I was driving my way up to Squamish I was thinking about how lucky I am to have these mountains so close to home. There when I need them. A place to go to refocus.

I pulled off the highway and on to the FSR and took it the 20 something kms up into the mountains to the trailhead. A few cars tucked in to the side of the road, much quieter than the previous trip.

I hit the trail just before 8am, a cool morning. I moved quickly up the old logging road that the trail follows up and around the mountainside. Easy moving trail up to a boulder field and then up one final chute before the trail levels out at the edge of the lake. There it was my objective for the day.

I snapped a few photos on my phone and zoomed in on the screen to assess the route ahead. 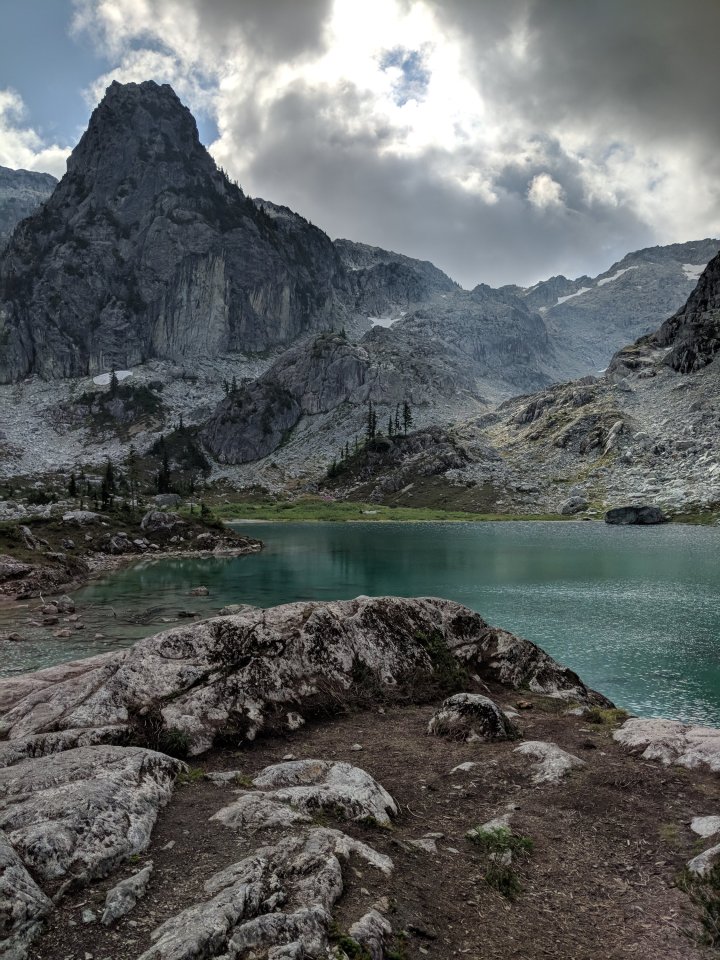 I made my way around the lake and ascended along the right side of the peak.

Being so late in the summer the snow line had retreated quite far up the mountain. I was happy of this since I elected to leave the crampons at home. I had packed light for this trip. Water bladder a couple of bars and a tin of oysters, oh and a kiwi which I realized I left on the dash of my car. Grr.

As I approached the snow line a chute presented itself for me. A lot shorter than I thought I would have to go, and not too steep, I opted for this route. Some quick feet helped me avoid some soccer ball sized rocks from taking my ankles out. 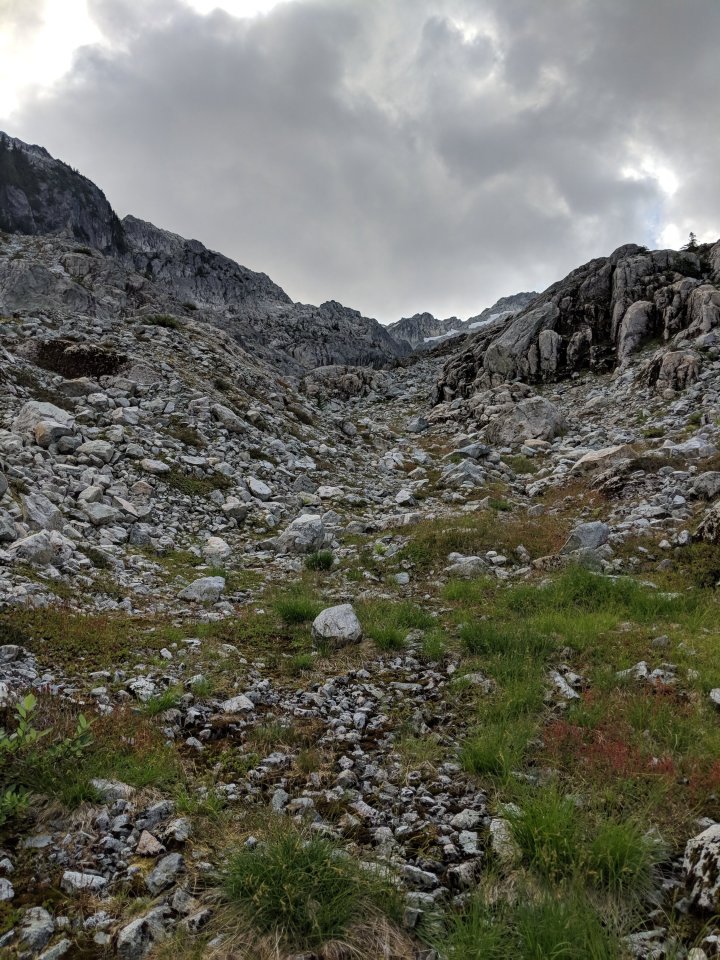 I reached the saddle and was surprised at how far the peak and its ridgeline trailed off into the background. From the saddle it was a short distance to get to the peak. Having said that once I got up to it, I found a sizeable gap that prevented me from reaching the front side of the peak that actually overlooks the lake. I am ok with that, for the views that I had from the backside of the peak offered me some new potential future routes to the surrounding mountains.

I finished up my lunch and began my descent. On the way back down I got to thinking.

A few months ago I hadn’t even heard of this lake let alone any of the peaks up here, and wouldn’t have likely came across them if it weren’t for the likes of Instagram. I also thought about how the sharing of experiences through articles or photos has gotten a bad wrap for “ruining” all these amazing places, and how the outdoor community has been living in this hypocritical dilemma. We all like the same thing, but we don’t want to share. Everyone has their own favorite nooks of the world and get very territorial over them. Almost irritated when they hear of how many people now frequent these coveted spots, as if it is theirs to own. It’s strange. This “I love nature and the outdoors, but it’s only mine and you don’t deserve it”. The truth is everyone heard about a place from someone else.

I’m all for sharing experiences with folks whether through Instagram or my own blog, and hope that maybe it even helps to inspire people to get out and explore the world around them. It is an opportunity to get more people exposed to the beauty of the area we live in, and in turn help to protect it.

The BCMC has recently done some trail updates to help keep the area pristine. So go enjoy it, take care of it, and please respect it.