Making the most of your weekend.

Time. These days it seems like ours is in limited supply, and how we spend it is extremely important.

Though we all have life commitments and goals we are trying to achieve. I have found it equally important to take time to focus on doing the things that help us express ourselves.

For me that usually means spending time in the mountains.

The last weekend in January signifies for myself and a few friends that it is time for our Annual Winter Camping trip. A group of us have been going for roughly a decade now. Not always all the same people, and not always the same location, but some incarnation of us have been going year after year. This Year: Garibaldi Lake BC.

4:45am I am awake before the alarm. I have had a lousy sleep. Tossing and turning since about 1:30. I get up. I have about an hour to put together my pack that is laying in pieces on the dining room table. This is how I always pack. Last minute inclusions/exclusions. Don’t forget toilet paper! Alex my wife always gets up and somehow remembers to ask me about the 3 or 4 items that I didn’t think to pack. Thank you.

I drove over to my brother Isaac’s house and picked him up. Then off to Jason’s where my cousin Ryan is dropped off. I pick up Ryan and all the gear for Jason, his sister Erika, her husband Jeff, and Jason’s friend Matt. I still had to pick up Bryan from Burnaby on our way so we made a plan to rendezvous at the McDonalds in Squamish. As we drive out to Burnaby I am trying to remember the street that Bryan lives on. Terry?? Thomas I think?? As I am trying to recall the name, both my brother and my cousin are starting to be convinced that I don’t actually know where I am going.

“Parker!”, I slam the truck down a side street. “I knew it was Parker”. We pull up to Bryan’s house and load his gear in the back of the truck and then jump on the highway to Squamish.

We pull up to the McDonalds and head inside for a quick bite and proper introductions to the members of the group that don’t know each other. All set we head out a little further down the highway before pulling off onto the FSR where we will leave the vehicles and set out on foot. We made an attempt to make it up to the actual parking lot but the un plwed road had other plans. Jason and I drove up as far as we could, dropped everyone off and all the gear and drove back down towards the highway and then doubled back to meet the others. 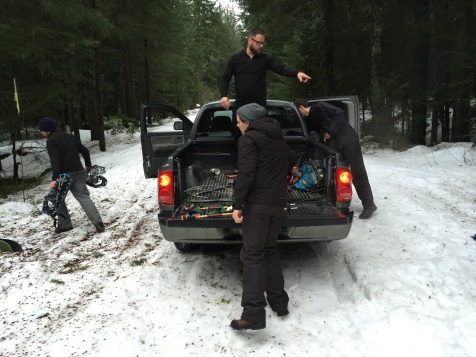 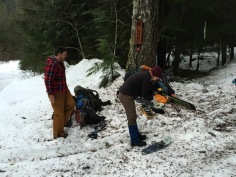 We geared up and started heading up the extra 2 km slog of a road. We came across a Subaru that had been abandoned  about half way up. Not bad I thought since my truck didn’t make it that far. We had a decent pace going. I was at the back slowed by some heel pain I had been dealing with over the last couple weeks, combined with the lack of sleep the night before and I knew what kind of a day I was in for. Ugh. We made it past the actual trailhead point and now could begin the 9km ascent up to Garibaldi Lake. This is a fantastic hike year round. Lots of creeks, a few viewpoints, and you pass 2 other smaller lakes (Barrier Lake, Lesser Garibaldi Lake) before arriving on the western side near the north end. 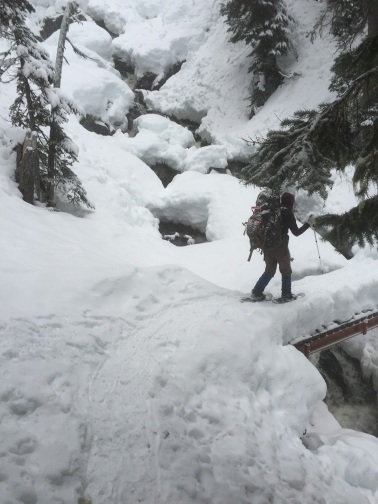 We arrived at the shelter. The decided option was to immediately set up the tents before it got dark. Isaac went to tackle that for us (him and myself) well I went into the shelter and started melting snow for water (this tends to be something that we are constantly doing morning and evening.) The shelters themselves are quite basic with a couple picnic tables a rope for tying food to, or hanging gear/clothing on, and a counter with a sink for grey water. All you need really. As the others finished setting up their tents they all made their way to the shelter and we began cooking dinner. We were all now starting to warm up(ish) and after dinner we played some “Nusht”(dice game) which we managed to incorporate into a sort of drinking game with a “consequence!” if you did not get any points on your roll. Haha that was a fun way to spend the evening. A few adult bevvies and some Boursin and Latvian Rye Bread. I was wiped. Shortly after we called it a night. 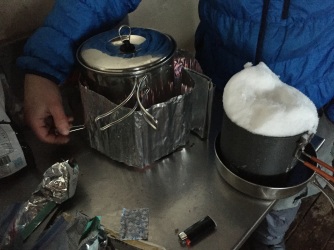 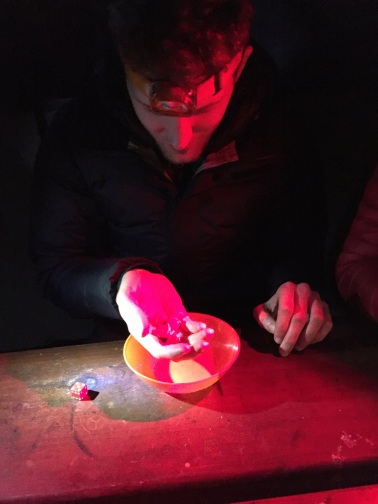 We got up around 7:00am. Isaac and I made our way over to the shelter to go start making breakfast. Oatmeal and tea. Classic. The game plan for the day was to follow my Cousin Ryan’s GPS coordinates and make it as close to the Black Tusk as we could. (We would be breaking trail as no one had been over that way in some days now.) So we set out back up to the junction where the lake trail splits off from the trail to Black Tusk itself. From here it was all breaking trail. It was slow going up the mountainside with quite a few icy spots and not much of a shelf to hike on. Eventually we emerged from the tree line and on to the flatter ground of Taylor Meadows. Jason at this point decided to hang back as he had been in crampons and was completely post holing almost every step. Matt elected to hang back with him. So the 6 of us ventured further on for another hour or so. We knew we wouldn’t make it all the way up to the “Tusk” so why push it. The wind now began to kick up a bit and we retreated to a small pack of trees for shelter while we ate some lunch of Beef Jerky and hot mustard. After lunch we started to make our way back.

Jason and Matt me us back at the tree line. They had been hanging around there for a bit and wanted to wait to head down the mountainside together. We slowly made our decent back to the lake trail and from there another 15 minutes and we were back at the shelter. Fun little day trip. By now we were slowly losing our daylight (it fades quick this time of year). Everyone’s mood was up but we were all pretty tired. We began the ritual snow melting and eating 2nd lunch or 1st dinner. For dinner my specialty meal I had been looking forward to was Rice, Chickpeas, lentils, and Garlic Naan bread. Yum. In the evening we found ourselves back around the picnic table knee deep in another game of “Nusht”. Later on Ryan made up a batch of trailside Mulled Wine, and Bryan heated up a bottle of Sake. We are a pretty spoiled bunch I thought as we handed around chocolate and sake and whatever else was in peoples flasks. It was reminiscent of a Christmas dinner or such. The comradery, Sharing stories with new friends, this is why I go on these trips. This is living. We finished up the dice game and called it a bit of an early night. I headed back to the tent with Isaac and climbed into my sleeping bag. Warm. Content. I think I fell asleep before my head hit the pillow (sweater.) 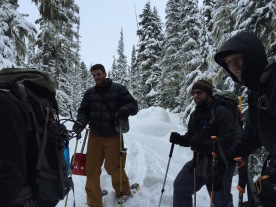 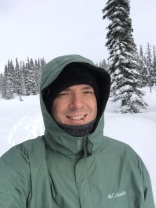 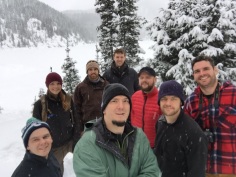 6:00am the alarm rang. Pack up day. Isaac and I begin disassembling the inside of the tent, pack up the sleeping bags, pads and such. We brought everything back to the shelter where we had left our backpacks. A few of the others were there already packing up their bags and having breakfast. A quieter mood this morning as we are caught in that threshold of being sad to leave yet happy to head home. It’s always a pleasure to get out on trips like this, and I am amazed at what you  can do with an extra day or so off work. That balance between being tired from a trip, yet recharged. I am very happy with the success of another annual winter camping trip in the books, and on a side note I try to always come away from a trip learning something that will better me next time. This trip it was that Naan bread is perfect for these sort of trips, and when winter camping.. Hut Booties are a must.

All pack we head out together for the 11km journey back to the vehicles and civilization. We are making good time, likely on account that everyone’s pack are a little lighter. As we hit the top of the ridge and the highest point of the mountainside, Jeff takes the opportunity (being on a split board) to rip down the trail ahead of us. As we are finishing the last push down the unplowed road to the vehicles we see Jeff propped up next to his backpack, and beside him a couple cases of cold beer he had run into Squamish for while we were still coming down. Classy Jeff. Very classy.

Here is a short photo montage of our trip!

One thought on “Winter Camp in Garibaldi”