So it has been said to me that sometimes I cut things a bit too close to the edge. But when an opportunity comes up to go and climb some mountains… what are you going to do.

My big bike trip is now only 2 weeks away, seems like a good time to go on a mountain climbing weekend!

Thursday night. 9:00pm. I come home from a Strata Council meeting. One of which I would gladly forget. Ugh. That (in my mind) no longer matters now. For I am getting up in 5 hours plus change to go climb mountains for the weekend. The range had already been decided. A group of mountains north of Pemberton BC whose names resemble many of the iconic figures of the Tolkien books (and later the films) “The Lord of the Rings”.

2:45am the alarm clock goes off. Remember. Your choosing to do this I remind myself as I stumble my way out of bed. Quick shower and then out the door to pick up my cousin and my brother, then over to Bryan’s place where we will transfer everything to his truck and head off towards Pemberton.

Still bagged from my work week I find myself dosing off here and there as we wind our way along the Sea to Sky hwy. The weather is fairly overcast, patches of dark sullen clouds here and there. Our last weather report suggested that we likely wouldn’t see the sun until at least Saturday afternoon. Fair enough. Can’t pick the weather.

We pull in to McDonalds in Pemberton for some sustenance. Mmm McDonalds breakfast. After a brief check of the map we proceed to the Forest Service Road that will take us to the trailhead. It is a pretty rough go once we get on the FSR. Encroaching bushes trying to take back the roadway. Loose rocks and washouts. At one point we had to hop out of the truck and move some of the larger boulders from a section prone to slides. We made it 5 out of the 5.8km up the road and were brought to a halt by a creek that looked beyond our desires to drive through. End of the line for the free ride. From here we walk! 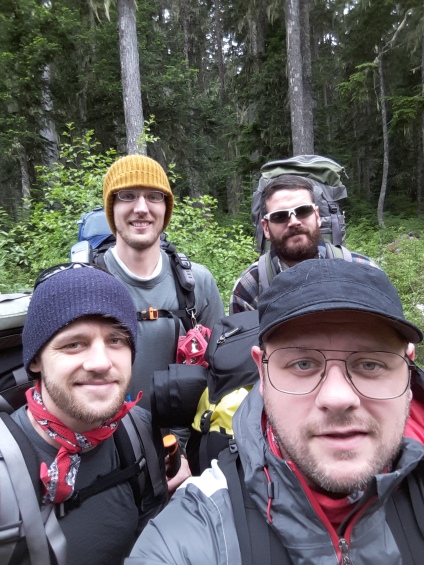 We made our way up through the valley, dodging the remains of snow left from winter. The scenery began to open up and before long we were getting some nice views of the mountain range we were planning on tackling.

We got to the cabin and promptly ditched our expedition bags, grabbed what we needed, threw it in our daypacks and took off to bag Mount Shadowfax before days end. The clouds were still looming, but it was not raining and it was pretty warm with the exception on some cold breeze coming down from the mountain tops. We maneuvered our way up a dodgy scree shoot and up on to the large boulder field just below the summit. It was slow going the remainder of the way up, but we managed to bag the summit and get back down to the cabin just before the rain started. 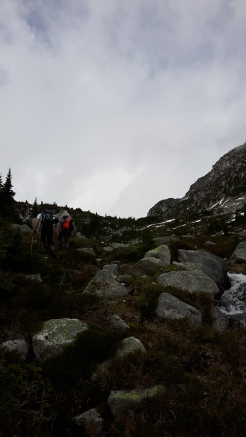 The next morning, we started stirring after the sunlight started creeping through the windows. A little slow from the hike (and the wine) from the night before, we began preparing breakfast while going over the game plan for the day. Our goal was to traverse along the back side of Mount Gandalf, head over the peak and across the ridgeline to Mount Aragorn. A look out the window showed us that the clouds were hanging low again over the mountain tops. Our best hope was that it would blow off before we reached the top. 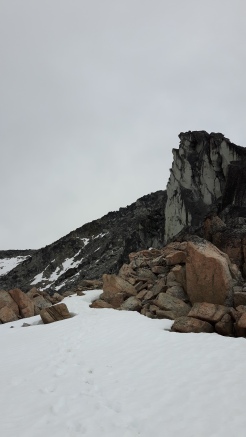 We made it up to the peak of Mount Gandalf in pretty good time and stopped there for a bit of a lunch before heading across the Col to Aragorn. There was patches of blue sky starting to appear around us and it was warming up. Fantastic weather for climbing! 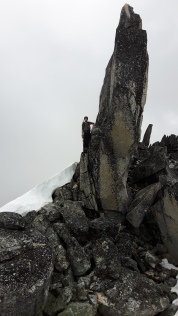 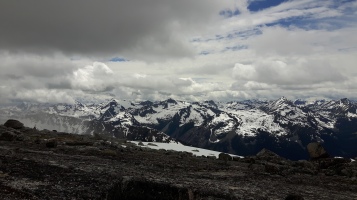 After summiting Aragorn we made our way back to the Col and then down a shoot less desirable than any of us would have liked but it saved us from back tracking the entire way around Gandalf. We made it back to the cabin and indulged in some apres hike bevvies. Fantastic weekend out with the boys and what a great experience to get out to some mountains that I had not yet had a chance to discover.

BC is an amazing place and I am so happy to call it home! 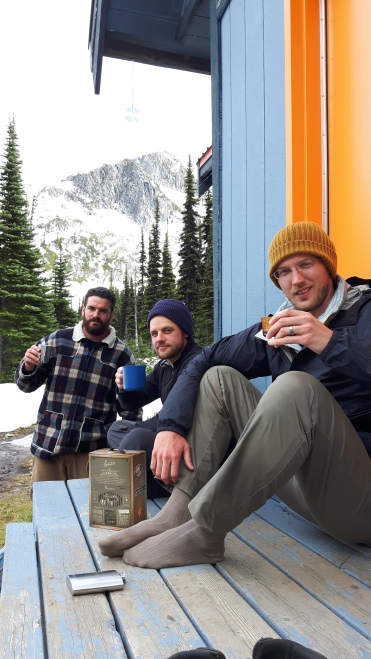 One thought on “Toiling with Tolkien”